There are several potential causes of holes in Hosta leaves, including insect damage from slugs or snails, disease, or even animal damage from squirrels or rabbits. It is also possible that the holes are a natural part of the plant’s growth process.

To determine the cause of the holes in your specific case, it would be helpful to observe the plant and surrounding area for any signs of damage or unusual activity. Additionally, consulting with a local nursery or horticulturist may provide more information on potential causes and solutions. 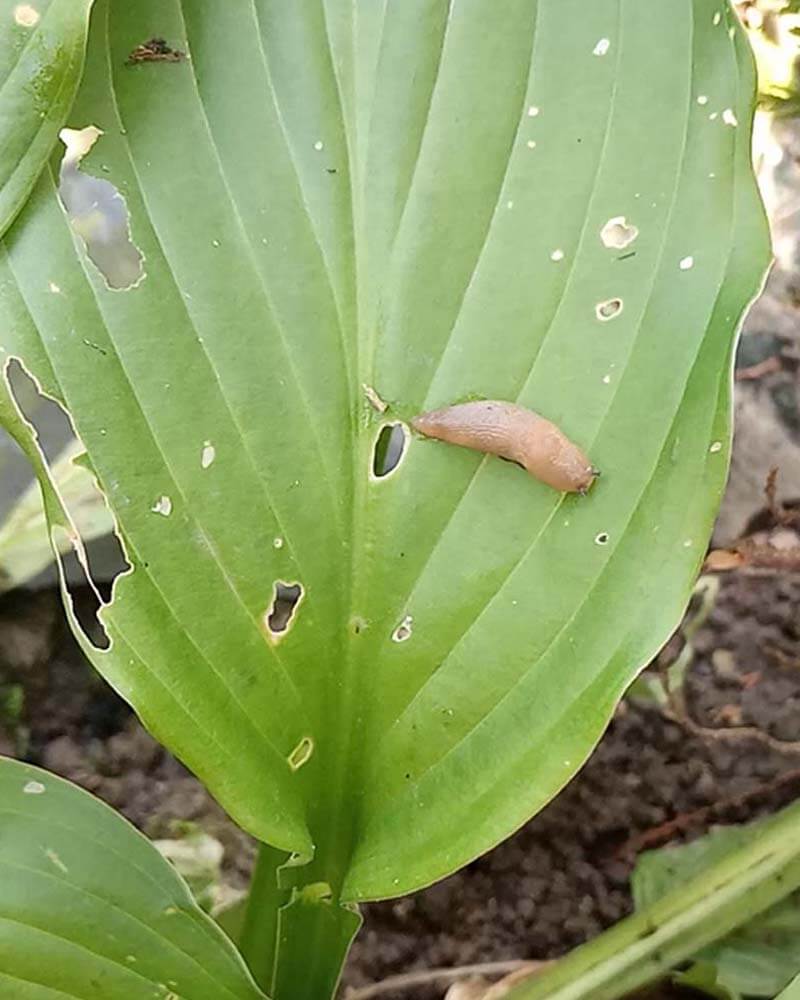 Slugs are common garden pests that feed on a variety of plants, including hostas. They typically feed at night, and can cause damage by leaving holes or ragged edges on leaves.

Slugs also leave behind a slimy trail, which can be a tell-tale sign of their presence. To control slug damage, you can use slug bait, copper barriers, or handpicking. Also, you can make your hostas less attractive to slugs by avoiding over-watering, keeping the area around the hosta clean and removing debris, and using slug-resistant varieties of hosta. 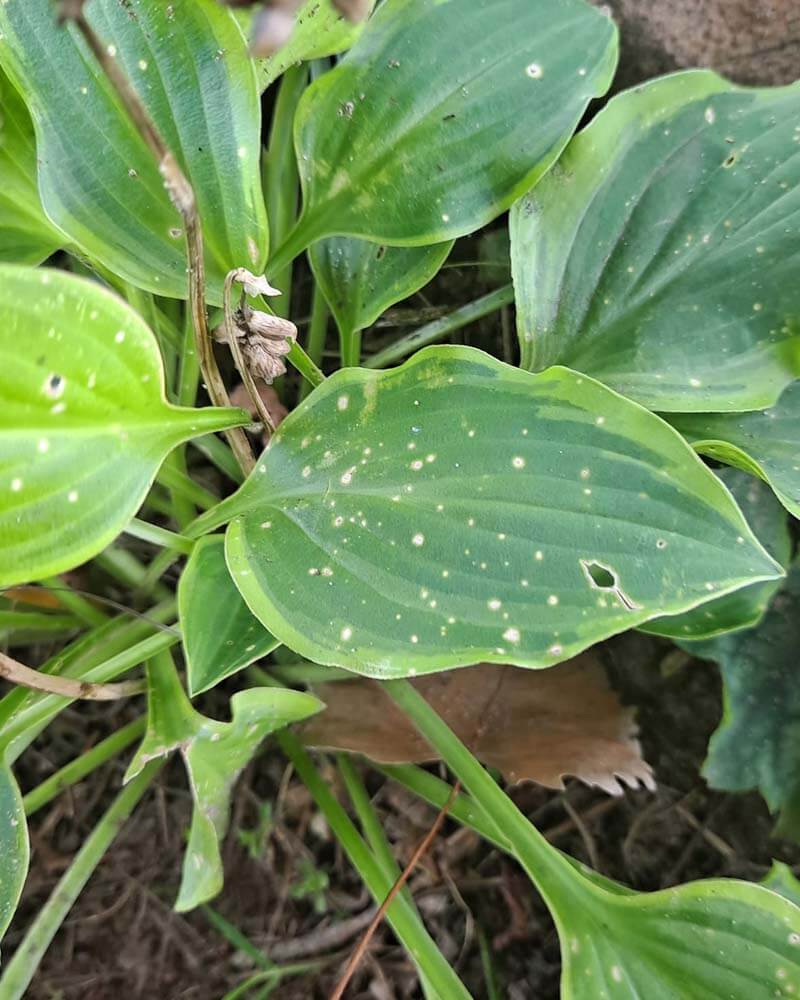 Certain diseases can cause holes in hosta leaves. Some common diseases that affect hostas include:

Additionally, bacterial soft rot and fungal crown rot can also cause holes and other symptoms in hosta leaves. These diseases are usually caused by excess moisture or poor drainage in the soil.

To control disease, it is important to practice good cultural care such as proper watering and fertilization, avoiding overcrowding, and providing good air circulation.

Additionally, it’s important to remove and destroy any infected leaves or plants, and to avoid working with the plants when they are wet to prevent the spread of disease. Consult with a local nursery or horticulturist for more information and treatment options. 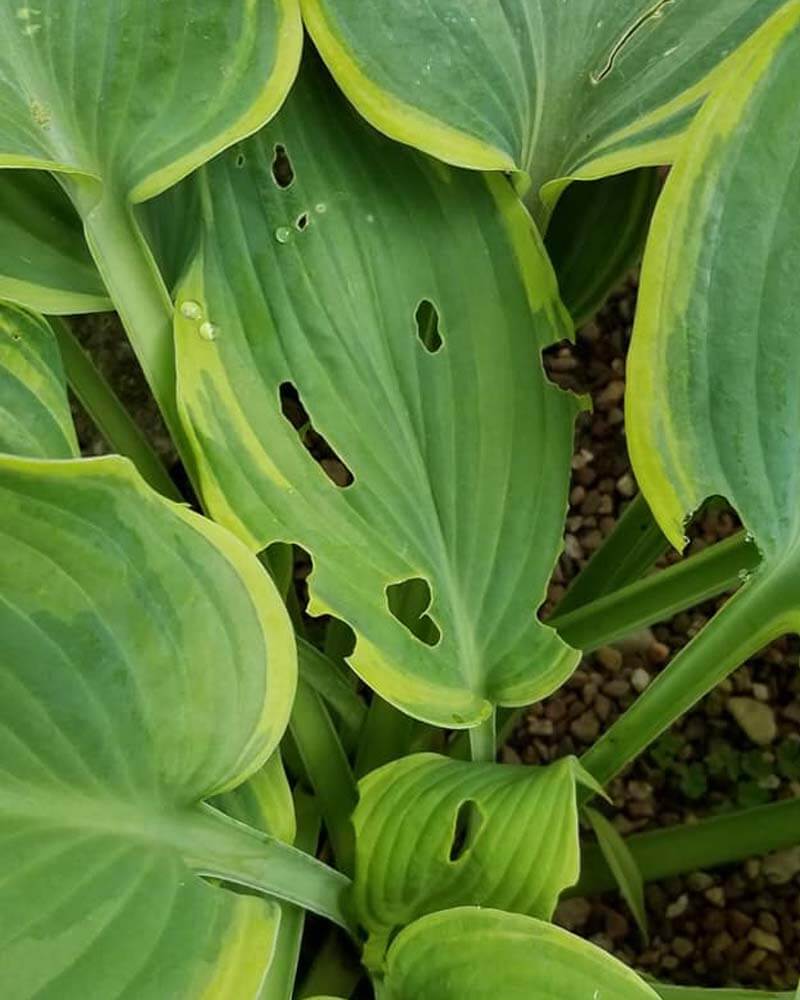 Certain insects can cause holes in hosta leaves. Some common insects that affect hostas include:

Additionally, other insects like sawflies, leafminers and thrips can also cause holes and other symptoms in hosta leaves.

To control insect damage, it is important to practice good cultural care such as proper watering and fertilization, avoiding overcrowding, and providing good air circulation.

Additionally, you can use insecticides or other control methods such as handpicking or releasing beneficial insects to control pests. Consult with a local nursery or horticulturist for more information and treatment options.

Grubs can make holes in hosta leaves, specifically the white grubs of Japanese beetles or the European chafers. These grubs are the larvae of the adult beetles and they feed on the roots of the hostas, this causes the hosta leaves to wilt and eventually die.

The grubs are usually found in the soil around the roots of the hostas, and they are most active during the summer months.

To control grubs, you can use a grub insecticide, or you can manually remove them by digging them up. Additionally, it’s important to keep the lawn healthy and maintain a good soil structure, since grubs prefer unhealthy lawns and damaged soil.

To prevent the adult beetles from laying eggs, you can use traps, nets, or repellents, or you can release beneficial insects such as nematodes that feed on grubs. Consult with a local nursery or horticulturist for more information and treatment options.

Some common animals that may damage hostas include:

Additionally, other animals such as raccoons, groundhogs, and voles can also cause damage to hostas by eating the leaves or digging up the bulbs. To control animal damage, you can use physical barriers such as fencing or netting, repellents, or by using humane traps to relocate the animals.

Also, you can use plants that are less appealing to animals, or use plants that emit an odor that animals do not like. Consult with a local nursery or horticulturist for more information and treatment options.

Will the hosta recover after the holes appear?

It depends on the severity of the damage and the cause of the holes in the hosta leaves. Hostas are generally hardy plants and can recover from minor damage caused by insects, disease, or animal browsing.

However, if the damage is severe, or if the roots or bulbs have been damaged, the hosta may not recover.

If the damage is minor, the hosta will likely produce new leaves and continue to grow. If the damage is severe, it may take the hosta some time to recover, and it may not be as full or lush as it was before the damage occurred. If the hosta does not recover, you may need to replace it with a new plant.

It is important to address the cause of the damage as soon as possible to prevent it from happening again and to give the hosta the best chance to recover. Proper cultural care such as proper watering and fertilization, avoiding overcrowding, and providing good air circulation can also help the hosta recover.

Additionally, it’s important to remove and destroy any infected leaves or plants and to avoid working with the plants when they are wet to prevent the spread of disease.