The use of tissue-culture (TC) technology to reproduce hostas for the retail market in the U.S. has had a huge impact. First, let me explain briefly what TC is. 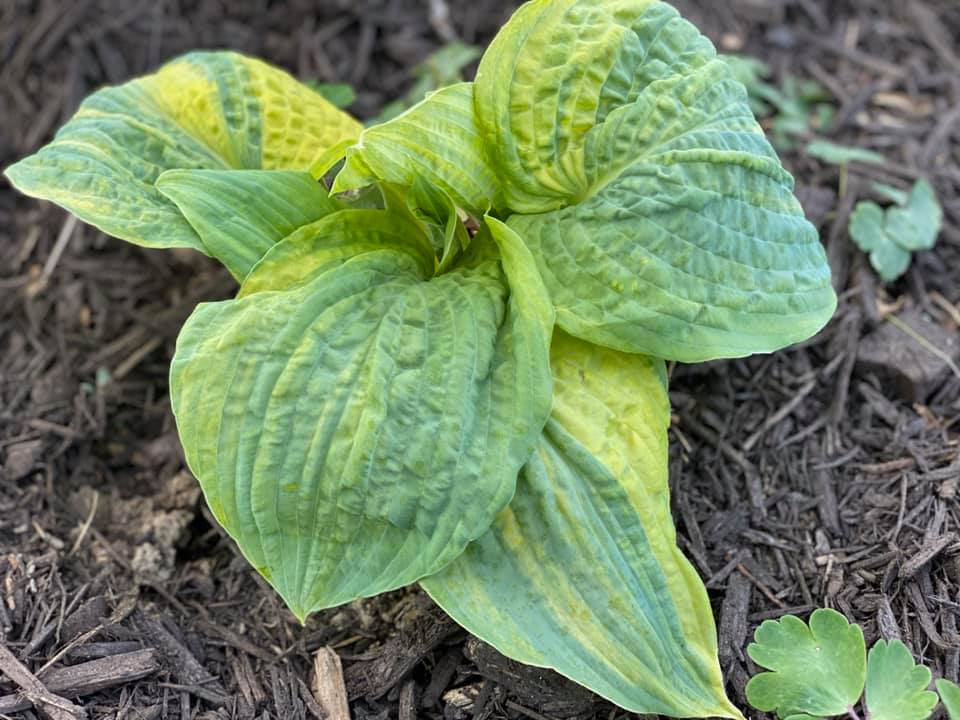 Tissue culture is the use of micropropagation techniques to create many plants from one. It is an asexual process that, in the vast majority of cases, involves the meristem, or growth point, found in buds.

Tiny sections of a growth shoot (which is the meristem and the tissue just behind it) are cut and eventually placed in a sterile growth medium consisting of a thick, sugar-rich substance, often called agar, and growth hormones.

After disinfection, the sections are first placed in a multiplication medium, which stimulates the cells to divide rapidly. These rapidly growing pieces of meristem-derived tissue are called explants.

The explants are divided about once a month and returned to the medium for further growth. This process is repeated until enough explants have been created. When there are enough explants, they are placed in a special rooting medium until leaves and roots appear.

Then, under carefully controlled environmental and sterile conditions (of a kind more often associated with a hospital operating room than a nursery), the young plants are nurtured and repotted as often as necessary until they achieve a size where they can be sold, either as tiny “liners”, in pots about one inch square, or as much larger plants, some of which have even undergone a period of dormancy.

The larger plants, which are a more recent addition to the market, are much more developed and often can be planted in the garden the same season they are purchased. This is often not the case with liners.

Thousands of tissue-culture offspring can be propagated in a one- to two-year time frame. The number of plants obtained will vary based on the growth rate of the meristem material and on the needs of the TC lab.

The growth rate of the parent plant often (but not always) has a great influence on the time it takes to grow a crop of tissue-culture plants. Solid-colored plants (green, blue and most yellows) generally achieve a high rate of consistency and viability.

The same cannot be said for variegated plants. The percentage of true-to-type explants that come from variegated parents varies greatly and can be small. The remainder of the crop may consist of any number of variations, usually referred to as “sports,” with some plants reverting to a non-variegated form.

Sometimes TC sports are beautiful or interesting and are grown to maturity for evaluation, perhaps eventually being named and introduced to the retail trade. Others show no unique characteristics or are undesirable, and these are usually discarded by reputable tissue-culture labs.

Conscientious hybridizers and TC growers should grow promising sports to maturity (whether TC or naturally occurring) before releasing them to the public, since some problems are not immediately apparent and may not show up for a year or more. Unfortunately, some hybridizers and TC labs release sports prematurely.

In what ways has the introduction of tissue culture affected the popularity of hostas over the last 20 years or so? The most obvious effect is that the average gardener can own the latest products from leading hybridizers much sooner and at a much more reasonable cost than when reproduction depended solely upon the multiplication of divisions in the garden.

As recently as the late 1980s, it was common for collectors to pay $1,000 or more at auction for a single division of an outstanding new cultivar rather than wait five to 10 years for it to become generally available. Prices well in excess of $100 were the norm if one wanted to purchase a new plant within a few years of introduction.

Today, in contrast, new plants are often available at a reasonable cost within two to three years of introduction and are inexpensive within five years or so. Furthermore, sports created through the tissue-culture process have greatly increased the number of new cultivar introductions.

It should be pointed out that there are some notable exceptions to the trend toward inexpensive newer cultivars caused by the use of tissue-culture techniques.

Two cultivars come to mind because they have proven resistant to quick reproduction through tissue culture. They are H. ‘Embroidery’ and H. ‘Dorothy Benedict’. The first is unique in leaf shape, with a margin that looks as if it has been stitched.

It has been tissue-cultured, but most labs have given it up as a losing proposition, since a high percentage of a typical TC crop lack the unique leaf shape. As a result, single-crown divisions of ‘Embroidery’ are often priced in the $50 range, when they are available. This is unusual for a plant first introduced in 1978.

H. ‘Dorothy Benedict’ is prized more for its breeding value than for unique appearance. It has been the most sought-after breeding plant since its introduction in the mid-1980s because its seeds produce a high percentage of high-quality streaked seedlings. Such seedlings often evolve into new cultivars when they eventually stabilize after several years of growth.

Like ‘Embroidery’, ‘Dorothy Benedict’ does not produce a high percentage of true-to-type clones of the parent in tissue culture. As a result, it is common to see ‘Dorothy Benedict’ offered in the $200 price range, when available, even though it has been around for more than two decades.

The 2004 edition of the Hosta Finder actually lists only six sources for ‘Dorothy Benedict’, with an average price of $240. H. ‘Embroidery’ and H. ‘Dorothy Benedict’ are not the only examples of plants relatively unaffected by the arrival of tissue culture. They are just two of the more striking examples.

Another benefit of TC is that plants coming out of it are free from nematode infestation, if the nursery selling them does not expose them to nematodes while the plants are being grown. It is commonly believed that the TC process also prevents transmission of viruses from the parent plant to its offspring, but that is not always true, according to TC expert Mark Zilis of Q&Z Nursery in Rochelle, Illinois.

To avoid viruses, a separate process of heat treatment is used, and it is not always successful. Today, however, most growers go to great lengths to assure that the mother plants in TC operations are not infested with viruses.

What are the negatives associated with tissue culture?

The first primarily matters to those who are involved with or benefit from the work of the American Hosta Society and regional organizations. The auctions at the annual conventions of the AHS and regional associations are a primary source of income and funding for these groups.

In the case of the AHS, plants are often donated by major hybridizers, and the organization’s coffers benefit when collectors pay large sums for new introductions. These revenues, along with other fundraising activities, help finance The Hosta Journal, the costs of which are not fully covered by members’ dues.

While TC has negatively affected hosta prices at auctions, it is certainly likely, on the other hand, that membership growth in the AHS and other hosta organizations has benefited greatly from TC because it has made so many more hosta cultivars affordable to the average gardener.

A second negative byproduct of TC is that the market is now replete with cultivars of unproven value or that are virtual look-alikes of existing plants. There are, for example, at least five green forms of ‘Halcyon’ that are most difficult to distinguish from one another.

There are now thousands of registered hosta cultivars, with hundreds more becoming available every year. The Hosta Library, an online source of high-quality pictures of most registered cultivars, includes over 3,700 different named plants.

In addition, new cultivars are coming to market that are not registered or mass marketed but simply offered for sale by their discoverers or hybridizers.

As mentioned earlier, it can take years—often seven or more—of growing a new cultivar before one knows all of its characteristics and can make a good decision about whether to release it to the public.

Before TC became available, hybridizers using plant division increased their stock of divisions over a period of years, giving them time to determine, with some certainty, qualities such as hardiness, growth rate, disease resistance and fertility. Many cultivars found their way to the compost pile during that process.

Today, on the other hand, growers are often so anxious to get a new plant to market before someone else does, due to the volume of yearly introductions, that plants are sometimes rushed to retail before they have had time to reveal all their secrets.

Some growers also are anxious about reserving especially appealing cultivar names before someone else registers them. That may motivate them to accelerate the introduction process. One cannot help but wonder if this problem might be alleviated if the AHS allowed hybridizers to reserve names for a finite period, as the American Hemerocallis Society does.

The last significant negative is that liner-sized TC plants are more delicate than divisions of a mature plant, and some claim they are slower to achieve the size necessary to take a place in the garden. If a plant is slow-growing by nature, it may well take several years before it amounts to much in the garden, regardless of how it is produced.

Mark Zilis points out, however, that the TC process actually speeds up the growth rate of some plants with reputations for slow growth. Still, some liner losses are likely, especially while they overwinter.

H. ‘Great Expectations’ comes to mind as a good example of how TC positively affected me. It took me four to five years of growing liner plants of ‘Great Expectations’, first in pots and then nursery beds, to achieve good size, with just a modest number of plants lost in the first year.

TC can be a mixed blessing in some ways but it is certainly much more of a blessing than a curse. The interest in growing hostas today is many times larger than it would have been had not TC made a huge variety of plant material available to the average gardener.

Tissue culture is also an increasingly prevalent form of asexual propagation and mass production for most other perennials and woody plants in our garden centers. Every gardener has benefited from this technology, not only by access to common plants at lower prices but also by the availability of cultivars that otherwise would be rare in the trade.

Personal communications with the following people was of immense help in researching this article: Mary Chastain, Glen Williams and Mark Zilis. Special mention goes to Charles Tuttle for his generous help in describing the technical aspects of tissue culture.