Hostas are a frequent addition to many gardens due to their beautiful foliage and annual blooms. Unfortunately, hostas are the target of several pests and many gardeners find themselves wondering what has eaten the roots of their hosta plants.

There are several animals and insects that eat hosta roots. The most common are:

To enable a hosta plant to continue to grow, pests must be identified and removed quickly to prevent significant damage to the plant.
Root damage can prevent hostas from being able to regrow, so keep reading to understand how you can identify and deal with pests in your garden quickly and effectively. 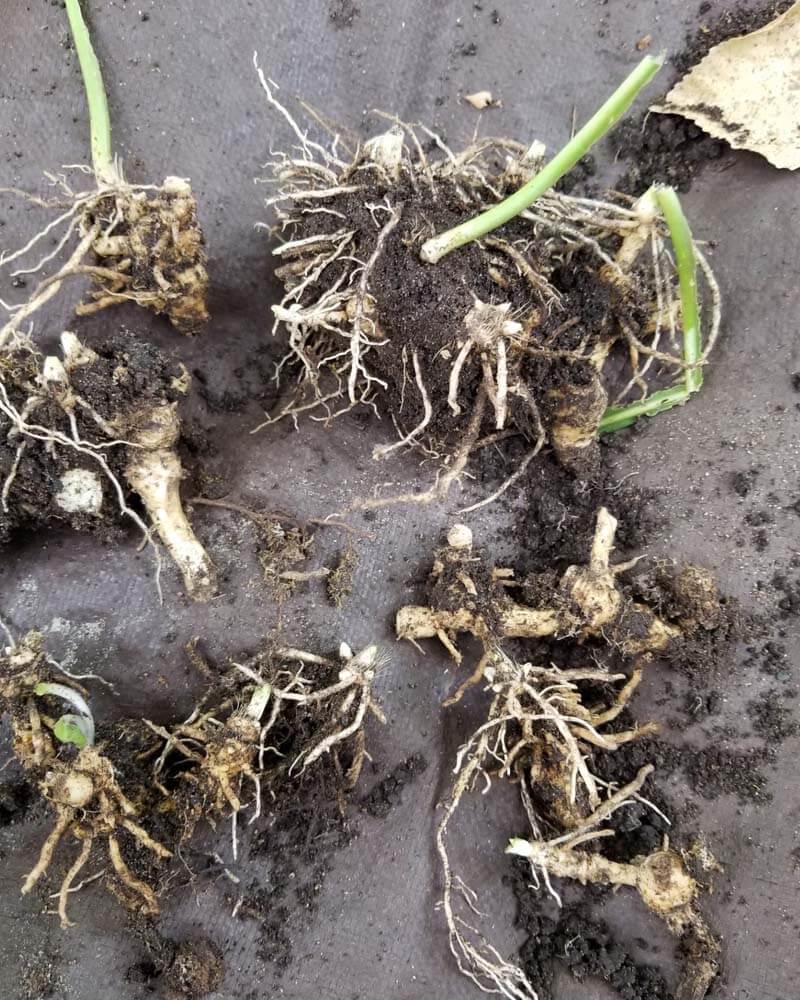 How Can I Tell What Is Eating the Roots of My Hosta?

There are five common culprits of eaten hosta roots. Identifying which pest is the problem is critical to being able to prevent the issue from getting worse.

Both mice and voles are known to eat the roots of hosta plants.
One telltale sign of these animals is finding holes near or around your hosta that are about the size of a quarter and that both mice and voles use to tunnel around the garden.

While rabbits certainly prefer the leaves to the roots, rabbits have been known to eat hostas roots. This is particularly true for young hostas plants.

Rabbits are relatively easy to identify; you can often find rabbit droppings around the garden, and perhaps even as the base on your eaten hostas. Another dead giveaway is rabbit holes, which will often have rabbit droppings and tufts of hair outside of them.

Slugs are a common problem with hostas roots, especially small black and brown slugs, which are known to target both roots and leaves of hosta plants.

Slugs need moisture to survive so more frequently come out at night. Have a look late at night or early in the morning, or for the telltale slime trails they’ll leave in their wake.

Although not as common as slugs, vine weevils can cause a lot of damage if left untreated. While at the grub stage, vine weevil grubs will focus on eating hosta roots, before later moving their attention to the leaves once they reach maturity.

The creamy white grubs can be difficult to spot but may be apparent within the soil of your damaged hostas. They are up to half an inch in length and will wriggle around when disturbed.

How Do I Stop My Hosta Roots From Being Eaten?

Now that you’ve identified what is eating the roots of your hostas, you may be wondering how to stop them. Keep reading to find out.

There are a few ways to get mice and voles to stay away from your hosta roots.

Poison should be the last result because of the risk of impacting the organisms in the garden that help your plants grow effectively.

Rabbits dislike some smells so you can use this as a way of limiting their activity in certain areas.

You can sprinkle these are your yard to deter them:

Now, let’s see what you can do to deter slugs.

Slugs are a common garden enemy, and so there are many well-known solutions to slugs

Vine weevil larvae are tricky to deal with due to living in the soil.

Similar to slugs, nematodes are the most fruitful way to reduce their numbers. Bear in mind that there are many types of nematodes, and so you’ll need to buy those that are specific to your target in order for them to be effective.

Will Hostas Grow Back After the Roots Have Been Eaten?

While leaves being eaten is a more common problem, the damage done by a pest eating the leaves is much less significant and unlikely to prevent your hostas from growing back next year. Damage to the roots, however, can have a much more significant impact.

When hostas roots are eaten or damaged, it means that the three key functions of the roots are limited as a result. These are:

Whether the plant can recover will depend upon just how impacted its root system is. As a general rule of thumb, most plants have a good chance of surviving provided that less than one-quarter of the plant’s total root system is impacted.

It’s also important to remember that in order to give the plan the best chance of recovery, you should remain vigilant. You need to ensure that the problem does not return and that no other pests come along and further reduce the strength of your hostas.

There are many pests that – given a chance – will make a meal of your hostas roots. If you spot root damage, taking steps to identify and remove the pests will give you the best chance of saving the plants so that you can continue to enjoy the beautiful foliage next year.